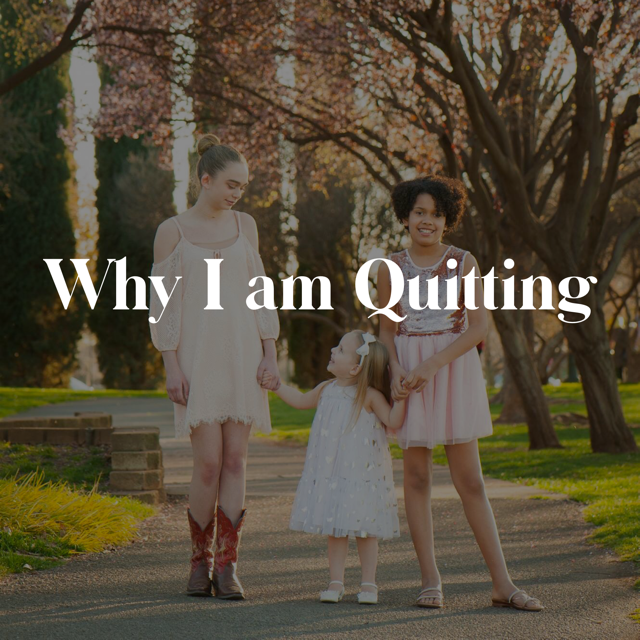 For the last 12 years I have worked tirelessly to be the best stay-at-home-homeschooling-mom that I could be.  Some of you reading that sentence are applauding me, while others are rolling their eyes and maybe even releasing an audible groan.  I know this because the one certainty I have learned over the last decade is that most moms like to pick a camp to side on and firmly hunker down on their side, pretty certain that their way is THE best way.  Mom shaming is a real thing, y’all, and it needs to end.

Is it possible that parenthood, motherhood, education, and even are children aren’t cookie cutter experiences? Maybe there isn’t a one size fits all approach? Maybe we could allow space for women to do what they believe is best for them in their motherhood journey without throwing stones? Maybe we could be inclusive in our tribes instead of exclusive? Maybe we could just seek to love each other well on this super hard journey called motherhood, without adding difficulty? That is my dream…but I digress.

So why, why after more than a decade am I calling quits to homeschool mom status?  It’s simple- I am done being afraid. Now if you had ever asked me why I homeschooled I would have told you it was because it was the best educational option that we could afford.  There was tremendous truth to that, but it wasn’t my root motivator. The thing that kept me plugging away when I was miserable, or pushed me to try again when both my child and I were in tears, was fear.  I had bought into the belief that this is what was required of me if I was going to be a “good Christian mom.” And if I wanted to do what was best for my kids I needed to protect them from all-the-things. This belief was reinforced in a thousand different ways, but it’s root was actually established in my own hard childhood experiences.

However, after trying to parent in various forms for over 16 years, watching, listening, and learning from it all– especially other parents, I have finally realized something in my core.  I am learning that motherhood isn’t about protecting our kids from all the hard, it is about modeling and equipping them to be able to navigate it all and ultimately being a safe place when they ache.  Somewhere along the line I began living like God was somehow small in all of this, that belief showed up by me acting like everything rested on my shoulders. Who my kids became, their futures, their everything was completely dependent on me as their mother.  I poured into and planned all the things for my kids, especially their education, not realizing that in so doing I took ownership of it all and deprived them of so much that is beautiful in the struggles of our journeys. I also forgot that in the end they have a free will, one that could, and sometimes has, varied greatly from my hopes and dreams for them. One day I will have to let them go, did I model fear or freedom?

I have seen mamas gifted to homeschool and children who thrive in it, and I have seen others who make my heart ache in the perceived failure of it all.  I have seen working mamas who are sending their kids to public school rocking it out, and I have seen others who are detached and their kids are on fire.  One thing they have in common, no one wants to be shamed about their choice. I choose to cheer for every single mama out there and support them completely on their motherhood journey– wherever they are and whatever that looks like.

Me?  I have no gifting to teach math or science, and it pains me to try.  Don’t get me started on how much I clench my jaw while watching a kid learn to write their letters. I love my children but trying to teach them all the things has sometimes resulted in me teaching them how to cuss instead.  I will treasure (most) of our homeschool memories and trust God will use it all but now we are all excited about a new chapter in our family story. Their academic teachers will get my unwavering support, random gifts of dark chocolate, and my unending gratitude for doing what I shall not.  I will work on modeling for my girls what it looks like to run after Jesus and the dreams he has given me, to fail, to press on, and to not let fear determine my steps. And, if I am doing it all wrong, there is Jesus and therapy.