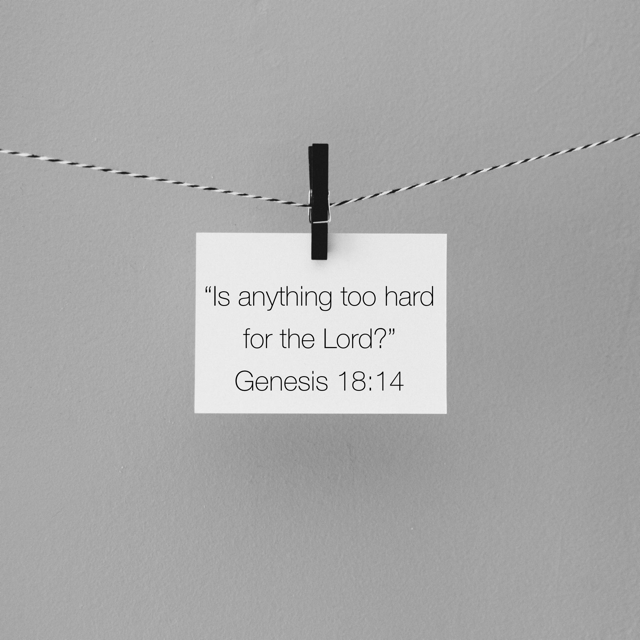 I have eyed the medicine sitting in its bright blue plastic bag in my refrigerator door off and on all day; tonight the shots will begin.  It is a 3-pronged approach to hopefully wake up my ovaries and shock them into function–not that I will need the eggs for the transfer we hope to do, but our bodies are picky-down to a cellular level-when it comes to breeding life. I need an egg. Technically, I need 1,000 things to go perfectly; the egg is just one part. My head throbbing, thoughts racing, all the improbability I seem to be facing, and I hear the familiar thought echo through my mind once again. “Now God? Now we are hoping for a child? At our ages? With this body?” My thoughts cascade into a familiar loop of all my fears and I feel the heaviness growing within my chest.  It feels like the choking of impossibility.

Remember the story of Abraham and Sarah?

Not that story again, not now.  How many times have I read through different writings of this familiar story, a seeming favorite to quote to the barren and infertile to remind of God’s ability.  Honestly, I have found it irksome. Our stories could not be more different. Sarah and I are in different worlds, and what could I possibly be reminded of that I haven’t heard a hundred times before?

Read it again. Dig. Look at it as you are, a woman who has long journeyed with barrenness and infertility.

That was several days ago…and I am still blown away by all I had never seen before about my girl Sarah.  So, I invite you to pull up a proverbial chair and sneak behind the scenes into my favorite chapter of Sarah’s story, the promise, as I unpack what I think the scene may have actually looked like on that day so very long ago.  One infertile woman’s look into the day of another…(Genesis 18)

Sarai. She had always heard of her incredible beauty, some even believed she was the most beautiful woman alive.  Even middle aged her body showed all the firmness of never having carried a child, another attribute of her beauty in others eyes, but a searing daily reminder of what had never been.  Her golden skin tones, her symmetrical features, she was a prize for any King, and once already she had been captured by a King because of her looks. Her worth as determined by her beauty fell flat as she considered how time had passed her by. Would she trade it all for a child? The one thing that every woman could do, she could not– she could not bear a child.  There was not a day that had gone by since early in their marriage that she did not hope for a child. As year after year passed, her desperation grew. There was only one thing left in her power to try: to substitute another woman in her place to be her surrogate. The desperate try turned into a cold reality of yet another hope broken when it worked, and Sarai still felt the same inside.  Her womb was still empty as she watched the swelling belly of another offer proof that it was her shame that made a child impossible. Not even Abraham could make her pregnant, though he could her surrogate. The world now knew without doubt it was Sarai who was broken. Her beauty, her freedom, and the wealth she enjoyed would never comfort that deep ache within her for a hope that seemed to be impossible.

Her hands went to work preparing the bread like she had done a thousand times before–the flour, the water, the kneading. She created the bread absentmindedly as her thoughts wandered to the guests her husband had said arrived.  Both culture and status demanded their hospitality today, but this was something more. Something inside her whispered these were no ordinary guests. She remained in the tent, hidden away, unseen, doing as was expected of her. But when the food was done, something drew her to the tent door, to the men that sat just outside of it.  She had to know more. Who were these men? Why were they here?

Then they said to Abraham, “Where is Sarah your wife?”

God shows up with two angels, shares a meal with Abraham and asks where Sarah is.  The omnipotent God knows exactly where she is. He knows she is listening at the tent door; it is His presence that drew her.  He sees her, not for her physical beauty like everyone else, and not for her barrenness. He is not hindered by her hiddenness; He has shown up, and He wants her to know that He sees her, truly sees her.  And he calls her not by the name she had known all her life, but by Sarah, the Mother of Nations. He lets Sarah know with one question that He sees her and exactly how he sees her: not as barren, but as exceedingly fruitful.

Sarah. Sarah? His words touched places deep within her. They held power; they held life.  This is what it feels like to be seen?

He said, “I will surely return to you at this time next year; and behold, Sarah your wife will have a son.” And Sarah was listening at the tent door, which was behind him.

Sarah couldn’t believe her ears as she laughed to herself.  Her heart raced. Had she heard him correctly? She would have a son next year?  Now, Lord? Now we are hoping for a child? At our ages? With this body? When it has been proven impossible for me by time? When we feel old? Now?

It was the thing she wanted most. This was the promise she had dreamed of having for most of her life.  Just when she surrendered to the reality of never, God spoke of a certainty her mind could not compute easily.

And the Lord said to Abraham, “Why did Sarah laugh, saying, ‘Shall I indeed bear a child, when I am so old’? Is anything too difficult for the Lord? At the appointed time I will return to you, at this time next year, and Sarah will have a son.”

Sarah, hidden within the tent, silent, her thoughts completely seen before the One Who Created Her.  Can you hear His tone as He pours His love into her? Sarah, I see you. I know your thoughts. I know you’re struggling to understand. I know it is hard to trust that the day will finally come. I know you don’t want more pain.  However, I am going to blow your mind. I am the God of the impossible. Nothing is too hard for me, and this is for my glory and always has been.

Sarah, shocked and fearful that her thoughts were known, and sad that they showed her vulnerability, her tenderness, and her pain, immediately sought to erase them.

Seen. No hiding. Jesus is not mad; He is honest. He understands. He isn’t surprised. He wants her to know she never needs to hide from him her innermost thoughts and pain.  He has her. He is the God who sees.

Her pain was never without purpose. In her season of waiting, she may never have imagined the plans God had for her.  The waiting was not by accident but by design. In a time where the only certainty of barrenness, of impossibility, would be time, he allowed the time to pass so he could perform his miracle.  God wanted to give her a front row seat to see that He is the God of the impossible. The one who the world thought was barren would become the Mother of Nations.

The tears keep filling my eyes.  He is the God who sees, not just Sarah, but me and you.  In our heartache, in the deserts, in the brokenness, in the waiting, He sees us.  He is the God of the impossible, and He always has a plan. And He is inviting us to have a front row seat to watch Him do immeasurably more than we could ever comprehend. Whatever OUR impossible, He repeats, “Is anything too hard for the Lord?” Walking in that truth changes everything.